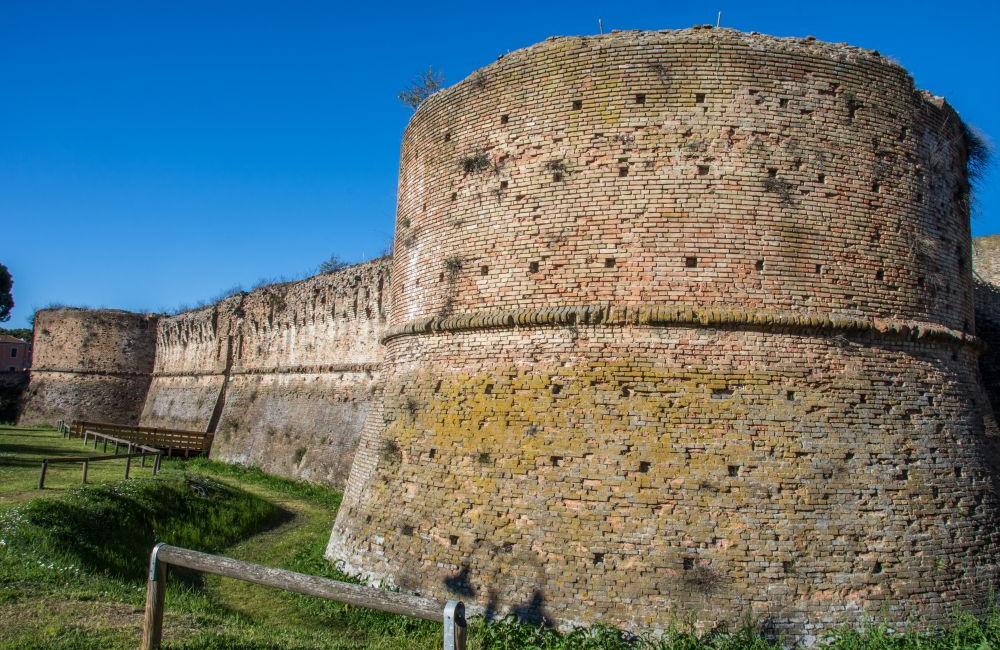 Rocca Brancaleone is one of the most visited parks in the city of Ravenna. It is especially used during the summer, when a famous and interesting movie festival takes place and when the park is the best place to escape the high temperatures of the city.

The fortress was inherited from the Venetians, who commissioned its construction in 1457: the occupants in fact felt the need to further protect the city on its northeast side, which was not really protected. Venetians were very interested to this side of the city as it was crossed by a big street that took directly to Venice’s heart.


The structure of the fortress

The main body of the building is the so-called fortress, square based and with an extension of around 2200 square meters. Its corners are reinforced with round towers that acted both as a defensive wall and as sighting towers.

Keeping in mind that the shoreline was nearer to Ravenna than nowadays, it is easy to imagine how the vicinity to the walls brought a bigger risk of attacks.

The Rocca was flanked by a small citadel that served as lodging for the army in charge of protecting the city and the fortress itself.

Surrounded by high walls and reinforced by 4 towers, the fortress contained also storage rooms, ammunition storages, several buildings for everyday activities, grocery shops and everything else that may be needed for the survival of the soldiers.

A huge moat surrounded the whole structure, that is still visible today.

It was not unusual to find, inside the cities, big fortified buildings. Rocca Galliera, in Bologna, standing in place of its namesake gate, is another example.

Both in Ravenna and Bologna, these fortresses were built with a double function: to offer protection against foreign enemies and to prevent possible revolts against the government of the city.


The story behind its name

There are several hypothesis regarding the origin of the strange name of Rocca Brancaleone. Some believe Brancaleone was the surname of whom was in charge of building the fortress. Others link its name to important patrician families.

The most probable theory sustains that Brancaleone is a composed word from “branca” (to grab) and “leone” (lion), a clear symbol of Venice, to declare the domination of the Venetians over Ravenna.

From a military point of view, two were the great battles involving Rocca Brancaleone. The first one, in 1509, when the army of the Papal State entered the city after more than a month of exhausting resistance; the secondo one, the so-called Battle of Ravenna, in 1512, when the troops against the Papal power (French and Ferrarese) conquered back the city.

Since the 16th century, the fortress will slowly lose its military relevance. Since 1965, it belongs to the Municipality of Ravenna and is part of a public park.