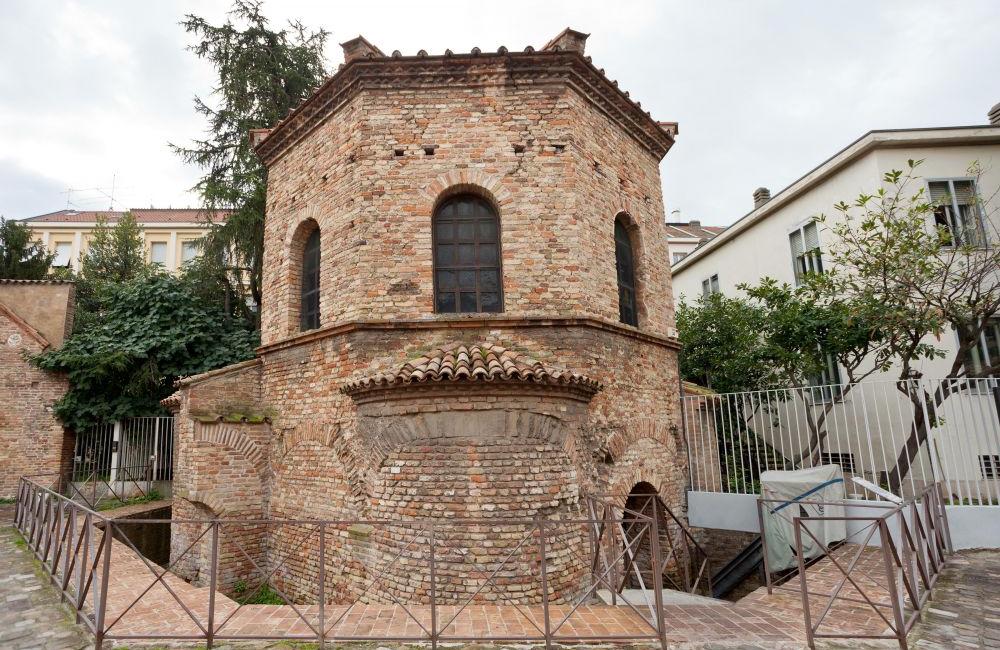 The building of the Arian Baptistery of Ravenna is connected to the presence in the city of Theoderic. The king belonged to the Arian religion, as did his whole court.

The Arian doctrine, which will subsequently be considered heretical, was founded by theologist Ario, who lived between the 3rd and the 4th century. The originality of his doctrine was based on Ario’s consideration that Christ was not as important as God himself. This position could not be accepted by the pure orthodox, and was immediately banned by the Council of Nicea.

The presence in the city of two different cults, Christian and Arian at the same time, made it necessary to have different places of worship. This is the reason why the Arian Baptistery was built in the square where nowadays we can find the Church of the Sacred Spirit, above the remains of the Arian cathedral and very close to Theoderic’s palace. The king had his own private chapel, one he frequently used and that is nowadays part of the Basilica of Sant’Apollinare Nuovo.

Like almost all the ancient buildings in Ravenna, the baptistery has suffered the effects of subsidence; being on a mobile and wetland territory, buildings have slowly descended during the flow of centuries.The baptistery has lowered itself over 2 metres from its original position.


The mosaic of the Baptism of Christ

The octagonal-shaped building is decorated on its outside by 4 small apses. In its interior few original decorations remain, especially near the dome. The central cornerstone of all the representations is of course the Baptism of Christ, connected directly to the building’s function and which the Christians could easily see reflected in the waters of the basin while immersing during the ceremony.

At its centre a young and naked Christ is represented, totally immersed in the waters of the Jordan river, and accompanied by the figure of John the Baptist.The white-haired man lying near the composition represents the river. All around the central representation we can find the figures of the 12 apostles walking in a long procession.

Their bodies are separated by palms, and all of them are looking towards an empty throne overcome by a cross wrapped in a purple drape. The composition underlines the differences between Christianity and Arianism. In fact, in the baptistery the apostles are looking towards Christ, represented in the central part emphasizing his link to a divine world. In this case, the Apostles are looking at the Cross, human symbol of Christ’s suffering and therefore underlying his earthly nature instead of his divine one.

The Arian Baptistery is, as other 7 buildings in the city centre, a Unesco Heritage Site since 1996, for the following reasons: “the extraordinary relevance in the supreme majesty of the mosaic art. They are the proof of the artistic and religious relationships throughout an important period of the history of European culture”.