The Basilica San Francesco, currently within the city’s urban area, was actually built outside the second ring of walls surrounding Bologna. Its current position, facing Piazza Malpighi, gives way to one of the surviving gates to the city, Porta Nova.

During the Middle Ages it was quite usual for churches to be built out of the city walls, also due to the birth of new great monastic orders, who needed to be near the city but did not find inside the city enough space in the buildings. The only spaces left available for them were the ones immediately outside the walls, from where the monastics could easily come and go about preaching and begging.

The architect who designed the church remains unknown. One current theory is that its design was made by the whole Franciscan Order in 1236. Little is left of the original church as the building was repeatedly damaged by the bombings during World War II.

As with the church of San Domenico, this church was surrounded by a large cemetery of which only the tombs of the “Glossatori” remain. The glossatori buried here are Accursio, who donated the building which is still currently home to the city council, and Odofredo and Rolandino de Romanzi.


The interior of the Basilica

The internal decorations were almost completely destroyed during the war, but fortunately one of the main medieval masterpieces has survived: the altarpiece by Dalle Masegne brothers, completed between 1388 and 1393. The tiles that embellish the altar reproduce images from Saint Francis’ life and are surrounded by images of the Madonna’s incoronation. Saints, God and some 19th-century additions complete the works.

On the pinnacle above these a decoration depicts the crucifixion, while the lower pinnacles display the bust of 8 prophets. The chapels around the main altar are decorated by Rubbiani and other artists of the 19th century.

Several sepulchral monuments garnish the walls, among which the sepulchre of pope Alessandro V, who died In Bologna in 1410, and the one of Francesco Zambeccari.
Zambeccari had an adventurous life of which we have little trace; he joined the royal guard in Spain, fought against pirates, was reported to the Inquisition and was an enthusiast of the experiments conducted by the Montgolfier brothers in France. It’s known that he started a series of aeronautical experiments which caused him several accidents, included his last and deadly one on September 21st, 1812.

Two cloisters flank the church on its south-side. One, called the Cloister of the Dead, is open to the public on occasion and is decorated by ancient funerary monuments. The second one, the main one, was the seat of the Arts schools until 1563, year of the construction of the Archiginnasio, i.e. the area of the university not focused in law. 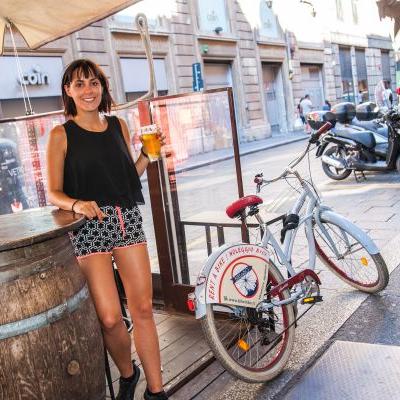 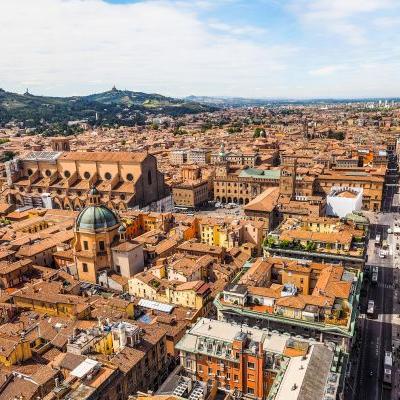