The access to Villa Ghigi is along Via Gaibola. The park, with an extension of around 30 hectares, is quite near the city centre and right out of Porta San Mamolo in Bologna. Its position offers incredible views of the city.

The park was inaugurated in 1975 and has since then been the stage of workshops, initiatives and events organized by the City di Bologna and the Villa Ghigi Foundation, which takes care of the park since 2004.

Villa Ghigi is one of the best examples of the integration and interaction between agriculture and public-use space. One of the interesting features of the park is that it maintains some characteristics that have almost disappeared from Bologna’s landscape both from an agrarian and a naturalistic point of view.

The park gets its name from the Villa, built and founded sometime during 1600. The villa is nowadays unfortunately almost impossible to reach, so the Foundation is housed inside its “Palazzino”: a small colonial house, one of the many which surrounded the main villa.

Several illustrious senator families alternated in the possession of the villa, among which we must recall the Malvezzi family, responsible for one of the final conspiracies against the Bentivoglio.

The park went into the hands of the Ghigi family in 1864, and the family lived there for almost a century. It was the home of the dean of Bologna’s University, Alessandro Ghigi, who became a famous geologist and naturalist reaching the highest seats of the Alma Mater from 1930 to 1943.  It was his wish, honoured by his heirs, to donate the Villa to the city council.


The trees and plants of Villa Ghigi’s park

The green park surrounding the villa houses local and exotic plants which are used for different school workshops. Its large vegetable garden and other areas host courses and sessions of “ortoterapia”, a rehabilitative process of discomfort in order to restore personal abilities which is based on encouraging and accompanying individuals in taking care of the green spaces.

Old and endangered fruit trees, a small forest of beeches, exotic trees such as a Himalayan cedar tree, as well as fruit trees, surround the so-called “cavedagne”: small gravel streets which border the fields.

These trees have thankfully been protected and represent an important genetic pool including almond trees, plum trees, persimmon trees, figs, vineyards, and many more can be found on its surrounding hills. 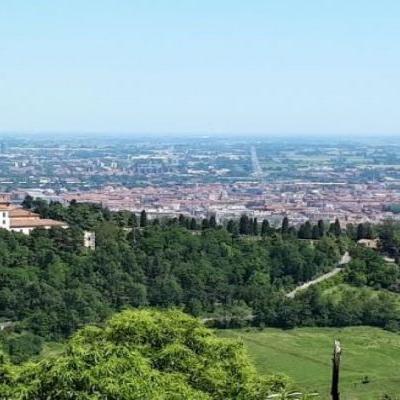